The National Fenestration Awards (NFA) hosted a great day out at Oulton Park race track on March 26th. In keeping with its remit to bring a breath of fresh air to industry awards, NFA laid on a series of driving experiences at the Cheshire race track. Neil Parsonson, Database Manager of Windowbase, was invited as a main sponsor of the awards – and kindly invited Tom Rigby, Business Development Manager of sister company MRA Marketing, to go along too. 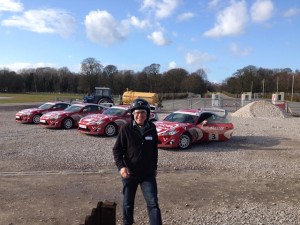 After some instruction in the relevant techniques and a few practice laps, the three events – Caterham driving, Land Rover Defender off-road and Toyota Rally car racing – were timed and an overall ranking decided. Much to his delight Neil came in joint third – which he won’t let Tom forget in a hurry! (Let’s just say Tom didn’t trouble the top 10).

“We had a really enjoyable day,” says Neil. “The National Fenestration Awards promised to break with tradition and they certainly did that with this Awards Ceremony. We’re looking forward to seeing NFA grow and expand and we’ll be sponsoring them again for 2015. I’m now waiting to see what they come up with next year that beats this!”